Jack Sweeney, the teenager who rejected Tesla and SpaceX founder Elon Musk’s $5,000 offer to stop tracking his private jets, has now agreed to stop sharing travel history information of another billionaire: Mark Cuban. The agreement between the teenager and the billionaire highlights the daily concerns about the privacy of public figures and the lengths they are willing to go to limit their exposure. Cuban has promised Sweeney to be his friend forever, but critics say the teenager’s hobby is “unfortunately” turning into bullying.

In 2021 alone, Meta reportedly spent around $27 million on security measures and private jet travel for Facebook founder Mark Zuckerberg. But Zuckerberg is not the only billionaire whose security is provided at great expense by big business and multinational corporations. Thus, many billionaires, like Elon Musk of Tesla, did not appreciate when Jack Sweeney, 19, began in recent months to carefully follow and share on Twitter each of their private jet trips. Sweeney said he implemented this tracking using bots that he programmed himself. 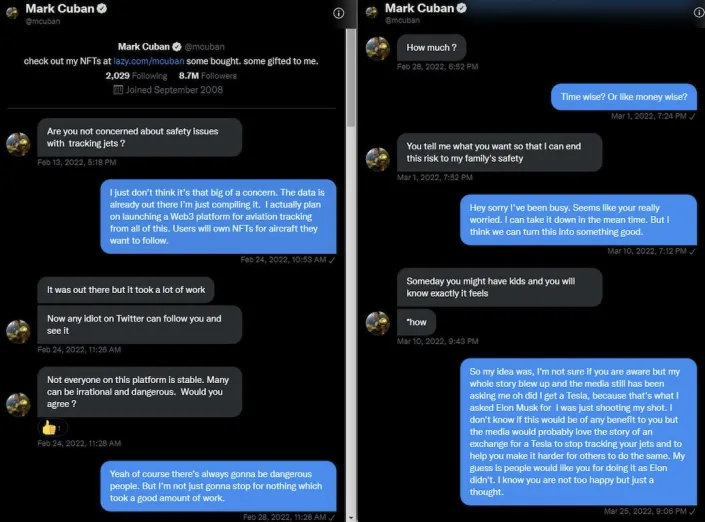 Four months ago, Mark Cuban, who was among those whom Sweeney monitors private jet travel, reached out to the teenager via direct message to raise his privacy concerns about his @MCubansJets automated Twitter account. this last. The @MCubansJets account is indeed the autonomous bot that tracks the movements of Cuban’s jets in real time. The account reportedly posted the latest on Cuban’s jet flights on April 7 and his bio now says he was “turned off”. Sweeney said he agreed to stop following Cuban’s movements.

Screenshots recently shared by US media reveal direct Twitter messages between Cuban and Sweeney, with the billionaire confirming their authenticity. Aren’t you concerned about the security issues of tracking jet planes? Not everyone is stable on this platform. Many can be irrational and dangerous. You tell me what you want so I can end this risk to the safety of my family,” Cuban said in February in a conversation with Sweeney. Cuban recently revealed that he reported the Twitter account for impersonation.

However, the account was reportedly only decommissioned for a few weeks. Sweeney meanwhile said he doesn’t believe his automated accounts pose a threat to the safety of the people he tracks, as the information mined by his autonomous bots is already publicly available on air traffic tracking websites. . Its bots take this information, analyze it and publish it on Twitter. He said he was ready to remove his bots, but that this gesture will not be free. I’m ready to delete some accounts, but I won’t do it for nothing, Sweeney said. 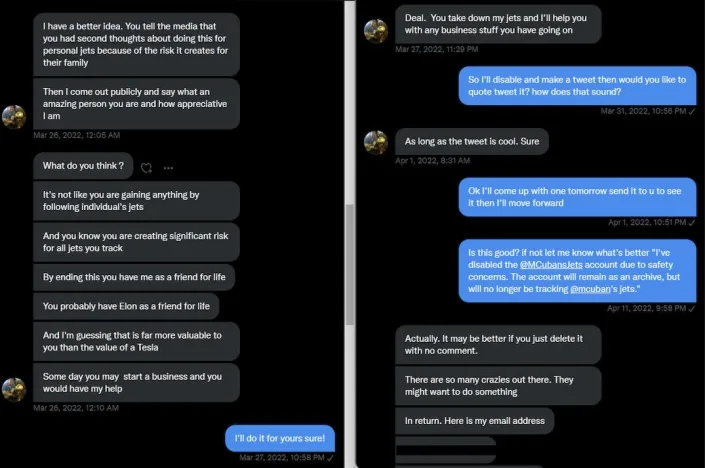 Sweeney appears to have agreed to deactivate the @MCubansJets account in the spring after Cuban offered to help him with business matters. The account, which has nearly 3,000 followers, was not deleted. But he hasn’t shared Cuban’s travel data since April 7. By ending this, you have me as a friend for life. You probably have Elon as a friend for life and I guess that means a lot more to you than the value of a Tesla. One day you could start a business and you would have my help,” Cuban Sweeney said in one of the chat messages.

Sweeney said he no longer shares data on Twitter, but still follows the billionaire on his Discord account. Cuban gave Sweeney his email address in return, but the teenager said he was owed the offer. He then asked to meet Cuban at a Dallas Mavericks game – the team the billionaire bought in 2000 for around $280 million – and Cuban agreed. However, Sweeney clarified that the date had not been set. He said a lot of things to try to get me to take it off, but he didn’t really try,” Sweeney said.

Additionally, Cuban said he would take no action against Sweeney if the tracking account remained disabled. This is the deal I made. I will answer his business questions,” Cuban said. Sweeney has previously made headlines for refusing a similar request from Musk to stop tracking his jets. Earlier this year, Sweeney asked Musk for $50,000 or a Tesla in exchange for deleting the account that tracks his jets after the billionaire said he “didn’t like the idea of ​​getting shot by a ping”. Musk blocked Sweeney on Twitter soon after he made his counteroffer. 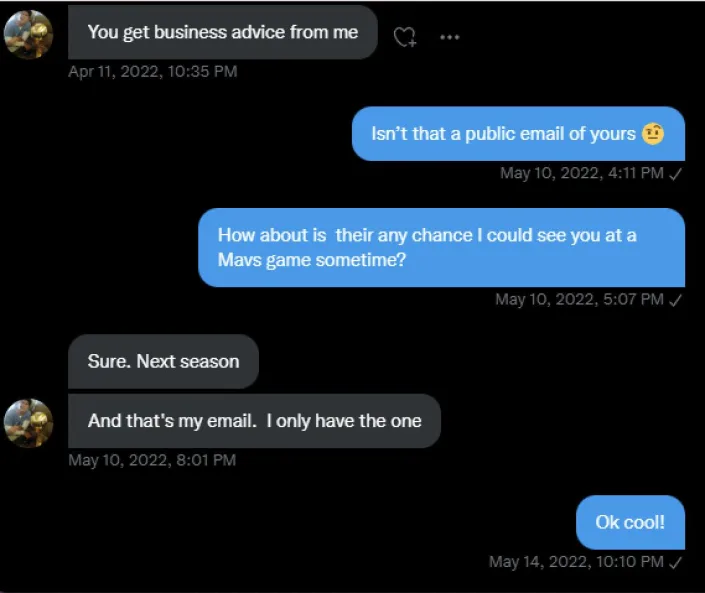 Sweeney said that since his efforts to follow Musk catapulted him into the limelight, public reaction to his work has been mixed. He says he’s received threats from Musk fans, but some of the people he follows, like billionaire Jared Isaacman, don’t seem to mind the attention. In recent months, Sweeney has followed the private jets of several celebrities, including those of Tom Cruise and Taylor Swift, and political and tech figures, such as former President Donald Trump and Mark Zuckerberg. Many call his behavior blackmail.

However, Sweeney doesn’t see it that way and insists on the argument that the data he uses is already publicly available. However, critics counter by arguing that even though this data is freely available, Sweeney has drawn everyone’s attention to the insights that can be gleaned from it and the applications that can be made of it. While Musk has blocked Sweeney on Twitter, there is no information yet on whether the billionaire intends to take action against the teenager. Zuckerberg and the other billionaires tracked by Sweeney’s bots also seem to have remained silent.

What is your opinion on the subject?

What do you think of Cuban Sweeney’s proposal to stop tracking his jets?

What do you think of the autonomous monitoring system set up by Sweeney? Does it pose any security issues?

Do you think Sweeney’s behavior is legal? Is he facing legal action?

The teenager who follows Elon Musk’s jet using an automaton he programmed himself also follows Gates, Bezos and Drake, and plans to create more to follow more people